Saagar – A New, Extensible Collection of Molecular Substructures for Cheminformatics

Saagar is a compilation of molecular substructures for cheminformatics applications, including read-across assessments and interpretable Quantitative Structure-Property Relationship (QSPR) models. Saagar structural features have been systematically gathered by studying and reviewing open source literature that highlights relationships between sub-structural moieties and a variety of physico-chemical; absorption, distribution, metabolism and excretion (ADME); and toxicological properties of molecules.

The current edition of Saagar, SGR-0120, contains 834 chemistry-aware and chemically viable functional groups and moieties that perform better than commonly used fingerprints in chemically based read-across assessment [1] and in building interpretable QSAR models [2].

Saagar is a compilation of molecular substructures for cheminformatics applications, including read-across decisions and interpretable Quantitative Structure-Property Relationship (QSPR) models. In contrast to using automatic fragmentation or atom- or bond-tracking methods to enumerate substructures in a molecule, Saagar uses pre-defined, chemistry aware and chemically viable diverse functional groups, moieties and scaffolds. Most of the Saagar features have been systematically retrieved from literature highlighting their relationship with physico-chemical; absorption, distribution, metabolism and excretion (ADME); and toxicological properties of molecules. In general, Saagar features capture salient structural attributes of a molecule, namely the hierarchical macro structural class (inorganic, aliphatic – acyclic or alicyclic, aromatic – fused or unfused carbo-aromatic and hetero-aromatic, and organometallic), elemental makeup, ring size, ring substituents and their positions, the extent of topological separation of certain hetero atoms, and scaffolds of endogenous biochemicals and common medicinal and industrial chemicals.

Because the universe of chemicals is unbounded, it is not possible to devise substructures and moieties that would completely cover all structural aspects. However, large benchmark compound sets (Tox21, DrugBank, ChEMBL) were used to ascertain sufficient coverage by Saagar features. A few examples of the coverage provided by some Saagar features are shown below.

Chemically aware Saagar substructures and moieties are interpretable by design, and are, thus, suited for interpretable QSPR models by providing chemistry-based reasoning for a prediction. Interpretability of QSAR models using Saagar features and Recursive Partitioning methodology is clearly demonstrated in the Tox21 vitamin D receptor (VDR) agonist assay model below. This model predicts whether a given chemical will be “active” (agonist) or “inactive” (not an agonist) of the VDR. Nodes with higher percentages of inactives are shown in blue, while nodes with higher percentages of actives are shown in green; darker shading reflects increased purity. 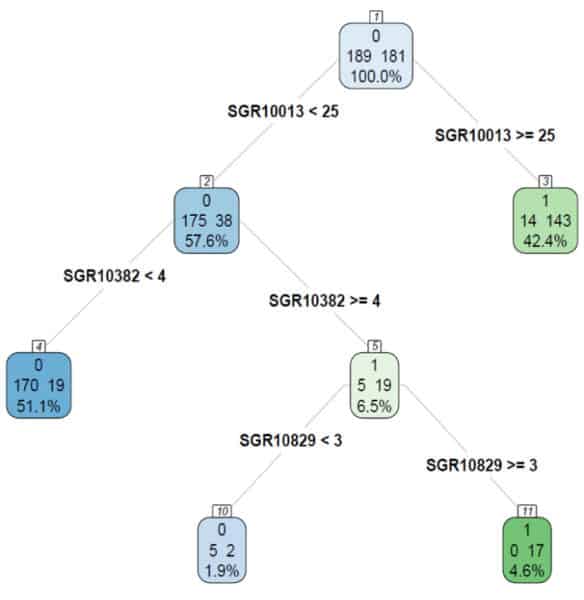 However, one must be careful about predictions from such simple, global rules. What if our query compound were a straight chain hydrocarbon with 30 C atoms? This model would falsely predict it to be a VDR agonist. Therefore, before accepting such a prediction, the overall “similarity” of the query molecule with the compounds in the node 3 must be determined as an applicability domain check.

Saagar-based RP models can also be used to help design compounds with desired properties. For example, if one were looking for compounds that are not agonists of VDR, the starting point could be a compound with <25 C atoms and fewer than 4 occurrences of the group with O connected to the middle C of a 3-C chain (SGR10382), because 90% (170/189) of such compounds are inactive in the VDR agonist assay (node 4).

Though the VDR model shown is relatively simple, it demonstrates how the recursive partitioning models built with Saagar features provide chemistry-based reasoning that can be used to predict biological activity or design compounds with desired properties, with confidence assigned based on prediction accuracies at each node. Notably, the Saagar set is extensible and because Saagar substructures and motifs are coded in SMARTS, they can be processed independent of any third-party software.

For development of custom QSPR models or read-across analysis, please contact us via email at software.support@sciome.com.

Sciome has developed first of a kind of chemical descriptors for interpretable QSAR modeling and read-across applications. Our molecular substructure based extensible set of descriptors will be unveiled during a presentation at the upcoming American Chemical Society (ACS Fall 2020) meeting.

View the recording of our presentation